I know exactly how much challenging and puzzling time it can be before buying a new laptop. So if you’re really looking for a new machine then I’d recommend you go with a laptop that comes with Microsoft Windows 8 since that’s the best operating system of this year and it has plenty of great perks such as touch screen display, countless new features and an amazing interface. Most of people already know that and are confused now about which laptop works best with Windows 8. Well, if that’s your question then you’re at the right place because here we’re going to review 10 best Windows 8 laptops of 2013.

With Windows 8 laptop industry has reached to a whole new level and almost all laptops are released with touch screen display and multi-touch gestures. Here in this list other than laptops we’re also going to cover ultrabooks and convertibles. If you’re new to Windows 8 OS then just like almost everyone you’re going to hate it at beginning but don’t give up that soon, use it for a week or more and you’ll see how much amazing it actually is. It takes a little time to get used to but once you’re done with that then you’re never going back at Windows 7. Anyways, let’s see what Windows 8 laptops are best and exactly which will suit you best. 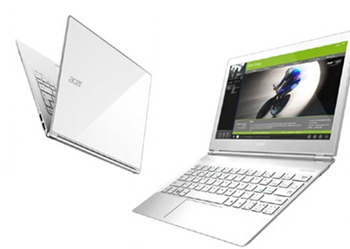 The Acer Aspire S7 Ultrabook is a fully Windows 8 loaded 13-inch touch screen laptop which is especially made for portability and mobility. It is an extremely lightweight machine and can be easily compared with Sony VAIO Pro and MacBook Air. The entire body of this ultrabook is made of aluminum including its keyboard but for some reason its back is designed by solid plastic and I think that’s good for people who use their laptop on their lap since it does not get wickedly hot. Its specs are 1920 x 1080 resolution screen, 1.8 GHz Intel Core i5 processor, 128 GB SSD, Intel HD 4000 128 MB graphics card, 6 hours battery life and Windows 8. It certainly is the best choice for people who need a lightweight laptop and have to travel along with PC. 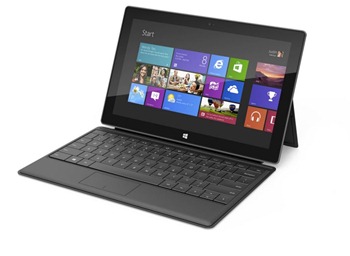 The Microsoft Surface Pro is a full fledged Windows 8 machine with all the features you’d expect from any regular laptop. It’s an extremely sleek device and can be converted from laptop to tablet within seconds. Its 11-inch display is one of the sharpest and clearest screens I’ve ever seen and its response is simply incredible. From looking at the above picture you must have guessed that it’s a tablet-laptop hybrid and you’re absolutely right about that. Surface Pro is one of the very impressive hybrids and if you’re looking for a tablet and a Windows 8 laptop at the same time then this is exactly what you need. It features 4GB RAM, 128 GB SSD, i5 processor and HD Intel 4000 graphics. 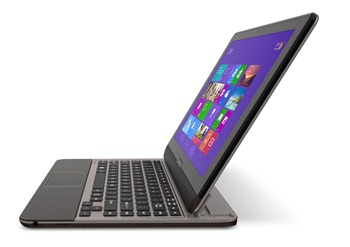 If you’re looking for a high-end Windows 8 laptop for a decent price then Toshiba Satellite U920T is what you need. This 14-inch touch screen laptop is especially designed for people who want latest features such as gestures and touch screen display. This one is yet another hybrid laptop which can be converted into a tablet quickly. It really is kind of unique device and has a very compact design. It comes with i5 processor, 8GB DDR3 RAM, 256 GB SSD and Intel HD Graphics 4000. Other than that, it includes my favorite feature which is backlit keyboard and of course Windows 8. All in all, I’d say this is a perfect device for someone who is looking for best Windows 8 convertible laptop. 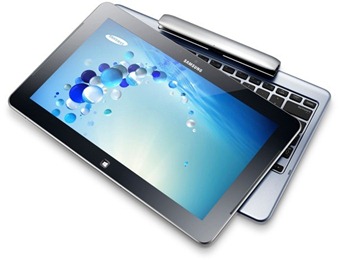 The Samsung Ativ Smart PC Pro is certainly one of the best convertibles and Windows 8 laptops. It simply outclasses all other laptop-tablet hybrids when it comes to design and it’s fully loaded with Windows 8. This 11-inch laptop feels extremely sturdy and flexible compared to all other similar devices and sports specifications such as Intel Core 1.70 GHz i5 processor, 4GB DDR3 RAM, 128 GB SSD and Windows 8. You can easily split its keyboard and make it look like a tablet and even while using tablet it is blazingly fast. Other than that, touch screen is very responsive, using S Pen is fun and it offers the same speed as any regular laptop. 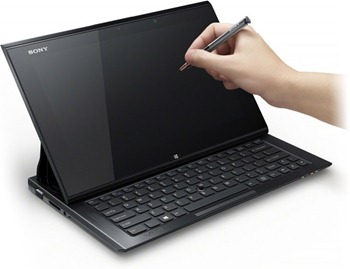 The Sony VAIO Duo is an 11-inch fully sliding laptop-tablet hybrid which comes with pre-installed Windows 8. Its display is one of the many advantages of this device and graphics are simply excellent. It packs Intel Core i5 processor, 4GB DDR3 RAM, 128 GB SSD and obviously Windows 8. Sony VAIO series has been on top for a while for delivering high-end and reliable notebooks which are extremely stylish and color full. This one is no exception and is an extremely unique kind of device. Unlike other Windows 8 hybrids this one is capable of running applications like Photoshop and Sony Vegas. The only thing I didn’t liked about this machine is that its keyboard does not have a trackpad and you simply have to rely on its touch screen display. 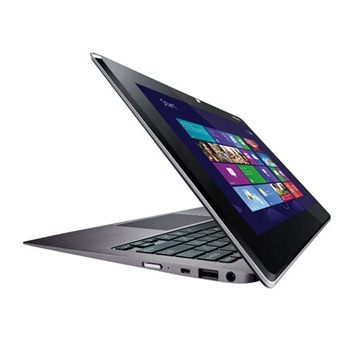 The ASUS Taichi 21 is an 11-inch notebook that turns into a tablet using a second screen on the back of lid. It’s an extremely light and sleek device which comes with pre-loaded Windows 8. Best feature of this machine is certainly its back-lit keyboard and other than that it has two screens, one on the back to use it as a tablet and one on the front of keyboard. It sports 1.7 GHz Intel i5 processor, 4GB DDR3 RAM, 128 GB SSD and Intel HD 4000 graphics. According to many technology reviewers it’s the most innovative laptop of 2013 and I guess reason behind that is certainly its dual display screen. Overall, it’s a perfect device if you want a responsive touch screen Windows 8 laptop. 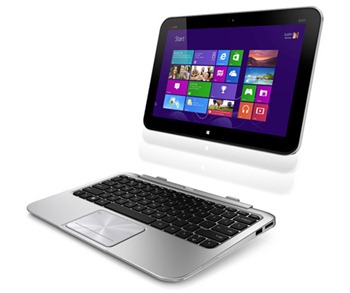 Since the release of X2 series it’s known for its unique design and modest performance. Other than that, its battery life is kind of impressive and just like other Windows 8 convertible laptops this one can be transformed as well. This 11-inch laptop runs a full Windows 8 and best feature of this hybrid is definitely its 8 MP rear camera which also includes a flash light for even better pictures. Unlike other convertibles from this list of best Windows 8 laptops this one is not that expensive and is reasonably priced. Specs are kind of decent such as Atom Dual Core processor, 2GB RAM, 64 GB SSD and best of all, 13 hours battery life. The HP Envy x2 is a perfect solution for travellers who can connect their device to wall only once in a day.

Just like its name suggests, the Lenovo ThinkPad Twist’s screen can be twisted away from its keyboard. Anyhow, that doesn’t mean its screen is weak or fragile but luckily its sturdy and one can use this mechanism roughly. Its hardware contains Intel i5 processor, 4GB RAM, 500 GB hard drive and Windows 8. So if you’re looking for tablet plus ultrabook that comes with Windows 8 then this is it. Its 12-inch IPS display with touch sensor makes sure that you don’t suffer and you simply don’t have to worry about breakage or scratches on screen because Gorilla Glass is included to take care of that. I’d highly recommend this laptop for business users because of its twist feature which can be extremely helpful in business meetings or while travelling. 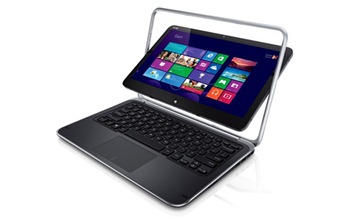 The Dell XPS 12 is one of the first convertibles and still my favorite when it comes to a laptop-tablet Windows 8 hybrid device. Its screen is totally different from the above laptops and no its screen doesn’t twists nor slides but it can be folded and converted into a tablet. This 12-inch machine runs on Windows 8 and comes with i5 processor, 128 GB SSD, 8 hours battery life and 4GB DDR3 RAM. It has got a lot of attention since it was first revealed in February this year and I think reason behind that is its flexible and flappy design. Other than cool design and latest specs it’s also one of the lightest laptop around so if you’re looking for something lightweight then this is what you need. 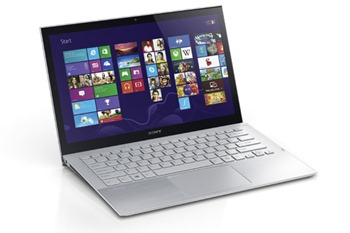 The Sony VAIO Pro 13 is the best laptop ever manufactured by Sony. It’s lightness, sleekness and performance is exactly what makes it best Windows 8 laptop of 2013. Its weight and thinness can easily compete with MacBook Air. The processor in this VAIO ultrabook is 4th generation as well and Sony has made absolutely sure that it competes with MacBook Air. So if you’re looking for something extremely light and with Windows 8 then this is it. Its insides contain Intel i5 processor, 4GB RAM, 128 GB SSD and of course pre-installed Windows 8. This 13-inch ultrabook is a perfect alternative for MacBook with Windows and I’d say you’re getting more features in this than MacBook such as touch screen display and Windows 8 OS.